What is the easiest way to convince one million people to give you one dollar?

By Paul Prins · Posted Under: Fundraising

Putting aside the difficult of actually have a message, story, or idea that one million people would care about…

Raising a million dollars is not as difficult as you might thing. Good ideas that are executed upon well do it all the time. There are many new startup nonprofits and businesses that raise at least a million dollars in their first 5 years. This takes a lot of hard work, networking, and being willing to tell your story over and over again.

If you’re dead set on the $1 from one-million people then you need to do 2 things exceptionally well. Assuming you want to do this rather quickly.

1) You must have a compelling story that can be consumed nearly instantly. To get in front of over a million people you’ll need to get some kind of virality to your message. Most things that get the widespread media/internet consumption are brief and easily consumed. This most likely limits you to a visual mediums of photography, graphic design, video/film, and motion design. This consumed item then must tie directly into the second thing.

2) It must be stupid simple to pay/donate. You are going to have a hard time converting your views/awareness into $1. So you’ll need to make it as simple as possible for them to do. They likely wouldn’t bother to even enter payment credentials, or sign into a service like paypal. So you’re left with something like apple/android/samsung pay. But here is the rub, not a lot of people have used it yet. As of June 2015 an estimated  3.6 million people had even used apple pay.  At the time of writing this is still the largest user base for contactless payments. The easier you make this step the more will actually give you $1. If you get more than 5% of your audience I would be very impressed with you (that’s 20 million viewers…). The easier they can go from your content to your payment the better your conversion ratio will be.

There you have it, a surefire way to grab $1 from one-million people.

However if you don’t care how long it takes you, I would recommend pan handling. The current worldwide life expectancy is 71 years. Assuming you’re at least 21 this would give you 50 years or 17,800 days before you would die (on average). That is only $56 a day you would need to score from passers by assuming you worked everyday for those 50 years. If you are in a large enough city this seems doable. Then the trick is to have a compelling enough reason for people to give to you. A funny sign would likely go a long way. This also assumes that the one-million people wouldn’t have to be unique.

Alternative idea: Open a dollar store, where every item only costs a dollar. In hindsight this seems like the most surefire way to get there. Though you’d be hard pressed to get 1 million different people through your store.

Here is to your first million my internet stranger. May it be $1 at a time. 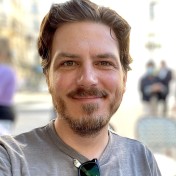